Friday morning I rented a fifteen passenger van and loaded twelve teenagers along with Charity and myself into the van. We drove – including rest stops – for around twelve hours to Florence Kentucky, where we spent the night at Hyatt Place. The next morning we would drive another twenty minutes to Petersburg Kentucky, home of the Creation Museum. We arrived around 10 a.m. and stayed nearly till closing – leaving sometime after 5 p.m. Today I’d like to give you a bit of a guided tour through some portions of the Creation Museum and talk about our experience.

The Grounds & The Petting Zoo:

The Creation Museum was packed when we arrived. Lines of people were everywhere and parking attendants were a frequent appearance as they waved us deftly into new spots. Once we secured our group tickets a group of us walked through the grounds. The Creation Museum has set up some very beautiful gardens. Several bridges cross over and stand near a large pond where small fish are frequent appearances and small machines allow you to purchase for twenty-five cents a handful of fish food to throw into the waters and watch as the fish flit about just below the surface.

The bridges are built in true Indiana Jones style – they bounce and jiggle as you run/walk/jump across. An adventure in and of themselves. Dozens of flowers, bushes, and other plants are everywhere, giving a unique botanical feel. A small portico is a nice place to rest and sculptures of sea creatures and dinosaurs made out of moss dot the landscape. A little smaller than I had expected, covering perhaps one acre – but extremely enjoyable none the less.

From there it was up to the petting zoo – a highlight for myself and many others. Unfortunately, I hadn’t been taking many pictures at this juncture so you will have to use your imagination. But among the creatures we saw were zorses (a cross of a horse and zebra), donkeys, llamas, a camel, goats, a pig, turkeys, peacocks, and rabbits. Many of the animals you could actually walk into their pens and pet and feed them. I spent some time in the pen with the goats feeding them. I also fed the donkeys – unfortunately one choose to gnaw on my hand (left a red mark, nothing more). The camel was enjoyable – it doesn’t even use its tongue to get the food off your hands, just these two gigantic lips. Below is one of the donkeys… 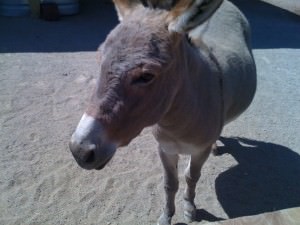 The Museum has several different locations to eat at – Lakeside Grill (outdoors, burgers and hot dogs), Noah’s Cafe (indoors/outdoor patio, soups/sandwiches/wraps), Noah’s Originals (indoors/patio), Palm Plaza Cafe (Tex/Mex). All very reasonable priced – I think everyone was able to get a full meal for well under $10 (mine was around eight for a large burger, fries, and a soft serve ice cream cone). The atmosphere was very nice as well in each location. 1 Two small negative items where (a) they charged us a small fee for a cup for water and (b) two of the teens were held up for 30 minutes getting food, while the rest of us received ours within around 10 minutes.

The Creation Museum has a number of top-notch documentary/entertaining videos one can watch. One of their features is a humorous/sarcastic Men in White video lasting 15-20 mins. in a special effects feature. Well-done, I was not entirely comfortable with the presentation due to its lite-handed dealing with evolutionists2Something that bothers me often on both sides…Evolutionists constantly ridicule Creationists as well.. The rest of the videos were more documentary in nature – and of similar quality as one would find at any general museum or on The History Channel (I personally enjoyed one on dragon legends).

We also attended the Planetarium. An extra eight dollars, this showing was a highlight for many of the teens. I was looking forward to it as well, unfortunately I was exhausted and fell asleep for around half of it. Very comfortable seats (that leaned back) where available. The presentation helped one understand the scope of space – comparing the size of various stars and the distance between planets, etc. The unfathomable magnitude was both impressive and overwhelming. Well-done for what it was I had hope more to just take a tour than learn about distances.

There is a main exhibit – the seven c’s of history – which we have not even begun to cover yet and then there is all we have mentioned as well as some external exhibits. The external exhibits where all very professionally done and one could as easily have been in the Smithsonian or any other popular museum as the Creation Museum. Impressive artifacts where everywhere – fossils, geological formations, etc. There was also an entire dinosaur section which I enjoyed very much. I’ve included some photos below. 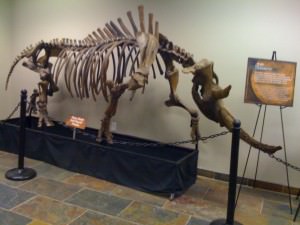 Okay, I lied. Not a dinosaur, this is a rhinoceros skeleton, but I wanted to throw it in here somewhere. 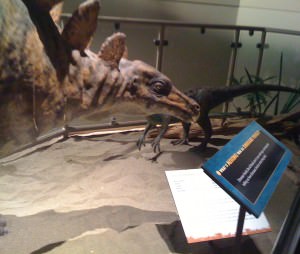 Now we see some dinosaurs! The large one here is a stegosaurus. 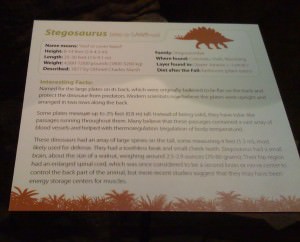 Here you can see the sort of information they gave us on the dinosaurs. 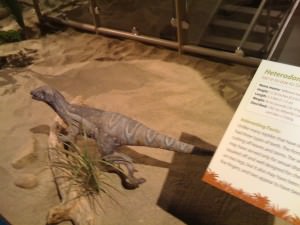 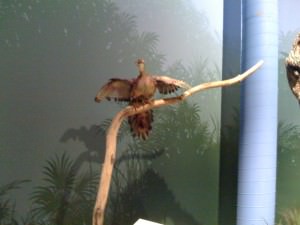 Could be wrong…but I think this was an Archaeopatyrx. 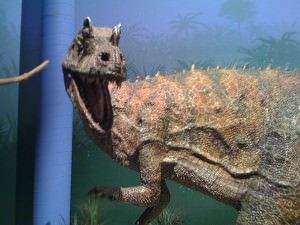 Rather not run into him while hiking. 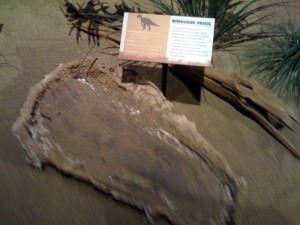 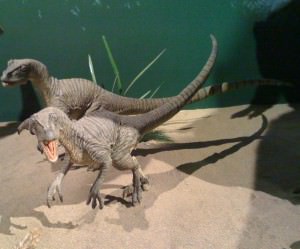 Raptors – apparently the ones in Jurassic Park where 3x the size of real ones! 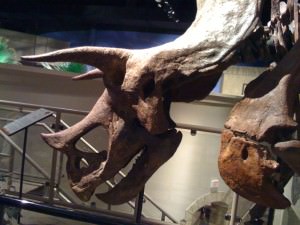 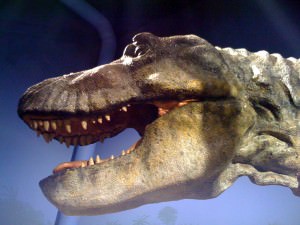 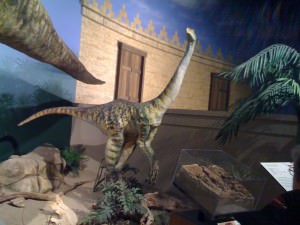 They had a lot of dinosaurs… 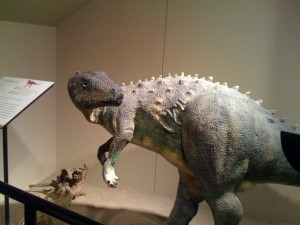 As you can see – the artists where extremely talented! 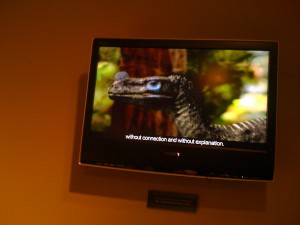 They also had little videos running at different junctures offering insights into dinosaurs and CGI renderings of them in action.

Well…I’m tired of writing for now, so I’m going to hold off here…Tomorrow I’ll try and post Part 2, which will include a tour of the main Creation Museum exhibit. For now, let’s just say the Creation Museum gets a 4.9/5 stars from me!